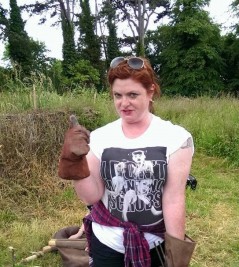 My current research involves Irish Iron Age equestrianism as a cultural intrusion, which in itself becomes a narrative of social changes to north western Europe during the last phases of antiquity. The prime focus is on increasing knowledge of a vital period of Irish archaeology – the transition period of the Late Iron Age into the Early Medieval period – to understand the main means of land transport, i.e. the horse, is to understand to some extent the infrastructure of Late Iron Age society. Previous paradigms have considered Ireland to have had a minimum of interaction with Europe. To date, my research refutes this, indicating that Ireland was regularly in communication with Britain and the rest of Europe.

My other interests are related to material culture and identity, mostly expressed through artefactual evidence, from the Late Bronze Age to the Early Medieval period, not just in Ireland but in Europe. I also edit EXARC, the Experimental Archaeology Journal.

Department for Employment and Learning (DEL)