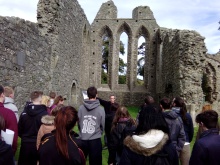 Mark has been working on medieval and early modern sailing and trading in the North Atlantic – a project which has included survey work in Iceland, Shetland, the Faroes, Greenland and Norway.

His work is part of an international team with links to the University of Vienna and the German Ship Museum, as well as groups in Scandinavia. In the fifteenth and sixteenth century, ships from Britain and Germany began trading with Iceland and the Faroes, exported manufactured goods in return for dried fish. The project has looked at the landing sites and the places at which the trade was conducted.

Closer to home, Mark has been working on late medieval settlement in Ireland. Over the last five years he has been mapping and recording sites in the uplands of the north of Ireland, looking at how the land was used and the types of building which were occupied. The survey has covered more than 50 sq km of bog and moorland, and found hundreds of new enclosures, houses and fields.

Houses were as central to the lives of people in the past as they are today. They had a practical importance and a symbolic value. The earliest standing remains in England date to the eleventh century, and a study of one of these, Scolland’s Hall at Richmond (N. Yorks.), has cast new light on the way in which space was used. For earlier buildings, we are dependent on excavation. A tenth-century house which Mark excavated almost thirty years ago at Steyning has been recently reconstructed at the Weald and Downland Museum (Sussex). The interpretation of the building incorporates information from houses which he has studied from many other parts of England.